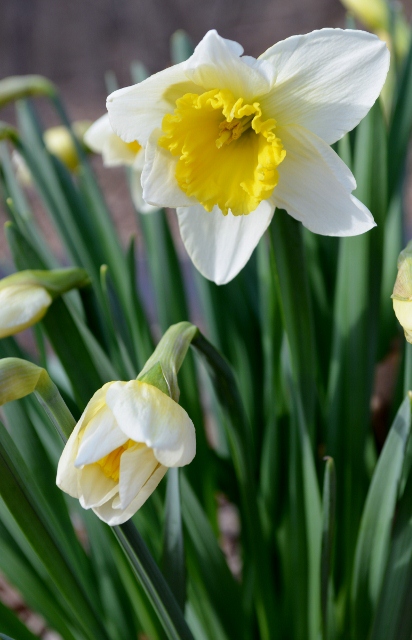 You know that spring is arriving in our area when you hear the call of the Eastern Phoebe in the early morning. The phoebe is a small gray flycatcher and usually arrives in the early spring. According to local folklore, it is time to buy the Easter ham when you hear the phoebe. However, this year with early spring and late Easter, the ham would be in the refrigerator for a pretty long time. For years, we have had a phoebe make its nest on the top of a column on our front porch. The only problem is that the column ends up streaked with bird droppings which is not too attractive but the advantage is that we can get a close look at the baby birds each year.

After an almost snowless winter, we are having a wave of 70 degree weather in March which has encouraged the spring flowers to bloom (Georgia Blue or Veronica Umbrosa above). Our biggest snow this year was at the end of October (for more on that snow, click here). At that time we had ten inches of snow fall on trees that still had their leaves resulting in broken electric poles, downed trees and no electricity for a week. The clean-up from all of the broken trees and limbs still continues and  every time we have a windy day, more broken limbs fall from the trees. After the October snow, we had four inches of snow in January and that has been it for the winter. Since we live on the top of a very steep hill, a snowless winter is fine with me.

We are enjoying the blooming spring flowers, the budding bushes (hydrangea above) and the bright colors of the birds as they are looking for mates and staking out the bird houses. The Eastern bluebirds are feasting on the mealworms and checking the bluebird houses. They usually nest in a tree cavity but we are hoping for that a pair will use one of the houses which are easier to view. The juncos are still around so it is not totally spring yet. Spring is such a welcome time of the year with the perennials reappearing out of the cold ground and new signs of life emerging daily.  Along with the author of Lamentations we can say:

The steadfast love of the Lord never ceases;

His mercies never come to an end; they are new every morning;